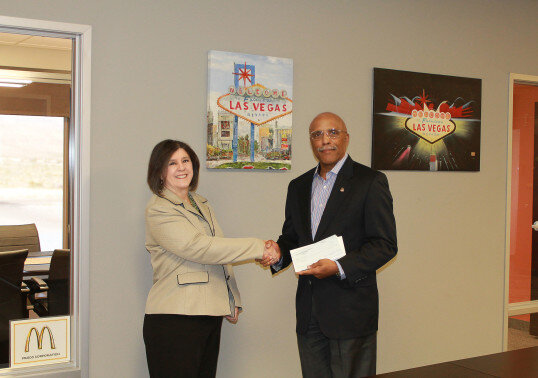 Nevada State Development Corporation assists with loan and 504 Vet Loan Advantage for Smith, a Vietnam veteran with background in technology sector who is emerging as an elite local business leader

As a successful franchisee who owns and operates six franchise restaurants in the Las Vegas Valley, Ron Smith has always emphasized discipline and innovation in his business enterprises.

Those traits stem from his experience as a Vietnam veteran who served in the U.S. Air Force, achieving the rank of staff sergeant, as well as his previous career as a marketing and management executive with such marketing giants as IBM, ROLM Corporation and AT&T.

When it came time to establish a new base for his burgeoning business operations, Smith drew on his experience and expertise, stressing the importance of owning the new property himself rather than leasing.

Now, Smith has purchased an office building on Cimarron Road near Interstate 215 in the southwestern Las Vegas Valley which he will use for training and as a corporate headquarters to manage his businesses.

Nevada State Development Corporation (NSDC), in partnership with Bank of Nevada, assisted with the transaction, coordinating a U.S. Small Business Administration (SBA) loan of $972,000 with an interest rate of 4.799 percent. The total project cost, including the purchase of the building with renovations, was $2.43 million.

“I’m very grateful for the help provided by the team at Nevada State Development Corporation,” Smith said. “They were supportive throughout the entire project, and it felt as if they were just as invested in the project as I was.”

As the state’s largest SBA 504 loan provider, Nevada State Development Corporation provides a valuable option for veteran-owned businesses, a cash-back rebate program known as 504 Vet Loan Advantage which offers a cash rebate of up to $3,000 to help offset a borrower’s loan expenses, including appraisal and environmental reports.

“It is our mission to stimulate economic activity in the state and facilitate the growth of small business, and we are always particularly pleased to be able to assist businesses owned by military veterans who have served our country before making the transition into civilian life and the private sector,” said Debra Alexandre, president of Nevada State Development Corporation.

Smith, who served in the U.S. Air Force from 1966 through 1970 and completed tours of duty in Vietnam and England, said he appreciated the support shown by Nevada State Development Corporation for military veterans.

“It was important to both of us,” Smith said. “The staff at Nevada State Development Corporation certainly has a special place for veterans. In my day-to-day life, I’m often so heads-down and hands-on concentrating on the business world, so I’m very grateful for the way they support veterans and veteran-owned businesses.”

Smith, who owns three franchise restaurants in western Las Vegas and three in Henderson, conducts his business operations under the name FRSCO Corporation. He began his career as a franchisee when he opened his first restaurant in Lake Havasu City, Arizona, in 1993.